Replacing The Hate I Feel With Hope 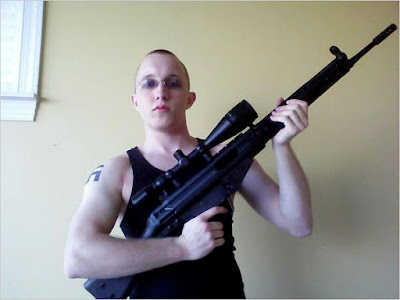 "Assassinate" will get you a spot above the fold, with your very own headline, every single time.

According to the New York Times, "two young men who are believers in “white power” have been arrested and charged in Tennessee in what federal officials described as a plan to assassinate Senator Barack Obama and kill black children at a school."

It is amazing how energetically someone like Daniel Cowart, the young man in the picture above, will cling to a tradition of hatred that is so barren, so desolate - until you remember that there are people who grew up in the desert who think cacti are beautiful.

The article also stated, "federal officials said that both of the men who were arrested — Paul Schlesselman, 18, of West Helena, Arkansas, and Daniel Cowart, 20, of Bells, Tennessee. — told interrogators that they had talked of assassinating Mr. Obama."

To assimilate into America's mainstream, when the rest of the life you know and have known is a relic of days gone by means to many that they must disavow their own self-image; in more cases than you can imagine, this is an impossible emotional hurdle for them to overcome.

We live in a world where we want measurable, quantifiable, scalable action plans that will tell us, if we devote a certain amount of hours, and a certain amount of money, that the kind of racially oriented problems people like Daniel Cowart and his accomplice, Paul Schlesselman, represent will disappear.

I wish it were that easy - actually, I pray that some one comes up with the formula to turn the lives of people like this around.

Because it is going to be hard to replace the hate I'm feeling right now with hope.

Hope that when the fever over this election dies down, people like this will finally begin to see how brown skin can be just brown skin, even when it belongs to the president of the United States. Hope that those who harbor racial animosity, who may be only a few degrees to the left of these skinheads, will finally see more of our similarities than our differences. Hope that those who are racially ambivalent will generously accept the added emphasis that will be placed on racial diversity.

But I've got to do it, otherwise, I'll be held hostage by these two even while they sit locked in their jail cells. My hatred of them would be the same as their hatred of me. I will not let them intrude into my life long enough to truly, deeply loathe them the way I know it should be done - I cannot afford to waste the time it takes to be thoroughly disgusted, nor the energy it would require to completely revile their very existence.

Because if I don't replace this anger in me with some kind of hope that this time is one step closer to the last time this happens in America, I am almost certain to make the paper's front page myself - "Murder Suspect Arrested In Fatal Killings"