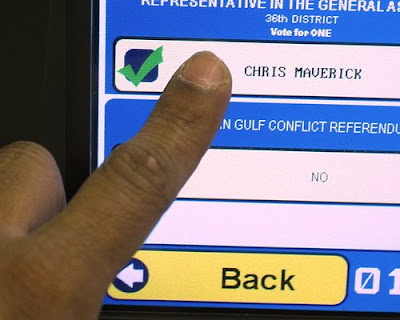 The polls are open now for early voting in many states. Black people are voting in droves - campaign volunteers who stripped off their "Obama ‘08" t-shirts in the parking lot, policy wonks reading emails and surfing the web on their Blackberries, along with a whole lot of us who only turn on the news at 6:59 pm to see what the day’s winning lottery numbers are.

And yet, you already know which voting precincts are going to make the evening news in your town on Election Night. You know the ones I’m talking about – the ones that will still have long lines of angry black people waiting to vote - while the TV reporter describes the scene behind him in the same detached monotone he uses to report on a car wreck.

You saw it during the primaries in Gary, Indiana, and Houston, Texas and Cincinnati, Ohio, and you will see it again in over the next two weeks Florida, North Carolina, and Virginia. Count on it.

According to the Associated Press, "there are 9 million newly registered voters who are overwhelmingly Democratic." And the Obama campaign has millions of campaign volunteers who are knocking on doors, making phone calls and coordinating rides to the polls across the country, an operation whose sheer size dwarfs anything the McCain campaign or the Republican National Party has organized to get out the vote.

But when you have the Legion of Doom with their super powers to call on, like the Republicans do, you can level the playing field a bit. I can just about reel off the names of the Secretary of State in places like Indiana, Virginia, North Carolina, Georgia, and Florida from memory, because there isn’t a day that goes by that you don’t see one of them on the news, talking about "voter integrity".

The thing is, only 24 people IN THE ENTIRE COUNTRY were convicted of illegal voting in federal elections between 2002 and 2005, according to ProgressiveStates.org.

Back in the sixties, it was pretty easy to figure out, with all those dogs barking and the water hoses from those fire hydrants going full blast, that if you had brown skin, you weren’t going to be greeted at the voting booth with open arms. It was the beginning of the real "Southern Strategy", when Harlington Wood, the GOP Deputy Director of Ballot Security, authored a "Ballot Security" handbook in 1964 to guide their field troops in an effort called "Operation Eagle Eye". The Wood manual originated the tactics we have come to associate with Lee Atwater and Karl Rove.

Voter intimidation, voter misinformation, voter credential challenges, and poll watchers taking pictures of voters – it's all there, a fully formed strategy that the GOP nurtured and spun off into the Republican National Lawyers Association (RNLA) and various "voter security" organizations. Add voter caging, voter ID, lack of polling site resources and polling site placement, and you are looking at the Republican Party’s last chance to upset Barack Obama's quest to win the White House.

So check your registration online. Show people you know how to check theirs, or do it for them if they don’t have access to the internet. Make sure you have your photo ID when you go to the polls. Leave your Obama t-shirt at home. And if you see any poll watchers out there, taking pictures...

...give them a big "Yes We Can" smile for their cameras.