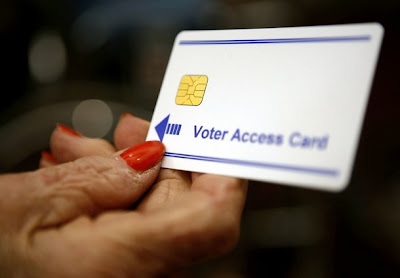 One of my younger cousins sent me an email a couple of weeks ago, asking me to write a piece about the safety of early voting. I was a little surprised, because she is a lawyer, with a lawyer for a husband – definitely not your low information voters. But her email was really striking for another reason – in it, she said "a lot of people are waiting until the day of the election because of fear. These are very political-minded people who are still scarred by the 2004 election."

Which means that some of the most highly educated African Americans under thirty don't have a lot of confidence in our electoral system.

I didn’t really have an answer for her at the time, because I had no idea myself what really happened to the votes that are cast before November 4th. And we are in Georgia, the heart of the South, which has given even people this young many, many reasons to think some kind of trickery might go on after they push the button on a voting machine, so I can feel where these voters are coming from.

What does happen to your vote once you cast it?

Most of the literature I surveyed about states who used electronic voting machines have fairly similar procedures. Here in Georgia, according to the Secretary of State's website, these are the mechanics of their ballot security procedure:

After you cast your ballot, your votes are immediately stored in the voting unit in two separate places. One location is part of the unit itself. The second location is a memory card that is locked into the voting unit during the election. At the close of the election, the memory card is removed and used to count the votes. The two internal sources plus the memory card comprise a two-part audit trail, ensuring that every vote is recorded and counted the way the voter cast them.

A back-up power supply ensures that once the system has been activated for an election, the contents of the audit record will be preserved during any power interruption to the system until processing and data reporting have been completed. If there is a power failure, your vote remains intact.

Does that mean these things are totally safe? No. And as average, ordinary citizens, some things, like whether or not the ballots are secured by sheriff's deputies or private security firms, or whether or not there are paper trails to audit voting machine performance, are not things we can do anything about as individuals at this late date.

But these fears are far outweighed by the psychological momentum early voting tends to give to the party who can "turn out" the most voters the fastest. When the margin of Democratic voters who vote early outweigh the Republican early voters, the numerical totals that are reported nightly can act as a incentive for other Democrats to "join the crowd", while having the opposite effect on the Republican voters, who might be less inclined to vote at all if they feel it is a lost cause.

So we need to vote early. We need to vote and remain vigilant about this end of the process, the one we can have an impact on, by doing things like reporting malfunctioning voting machines, and triple checking our ballots before we push the "FINISH" button.

So cuz, if you're reading this, you need to encourage those friends of yours to get to the polls Thursday and Friday. You need to go yourself. Because the old folks were right - the early bird DOES get the worm, and the early votes WILL help elect Barack Obama as your next president.