You Don't Have To Drink The Kool-Aid 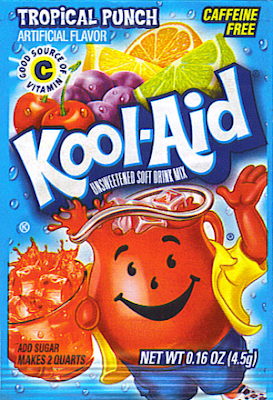 When I was growing up, we drank a lot of Kool-Aid. My favorite flavor was orange. We put so much sugar in our Kool-Aid that it could have been considered a liquid confection. We went through it by the gallon, especially in the summer months.

I took the art of making a good pitcher of Kool-Aid very seriously. I would take two packs of Orange Kool-Aid, one pack of Tropical Punch, and empty them into a small pot of boiling water. I'm not sure if the heat dissolved the Kool-Aid powder better, or whether or not the flavors seemed to blend together better because they had gone through some kind of chemical bonding process when they were heated. Then I added the sugar - two and a half cups - watching the slurry burble while the sugar crystals slid into the steaming water.

A sugary, tropical flavored scent filled the kitchen as I stirred. A minute later and I was pouring the contents of the pot into the Kool-Aid pitcher. Then I added tap water, stirred for another fifteen or twenty seconds, and I was done.

My mother didn't drink any of this - she thought it was too sweet. She would pour a glass about half full and add some water to dilute it. My father, on the other hand, loved this Kool-Aid as much as me and my brothers did, so I often had to make two batches a day.

You might think boiling sugar and prepackaged Kool-Aid mix is overkill, the way some people think the Obama Campaign is going over the top in its all out aerial and ground blitz. But these guys have gotten this far because they have done their homework - I would trust that they have factored in the level of difficulty they will have between now and November to keep their candidate ahead of the competition.

So if you are still on the fence about Barack Obama, if you still have reservations about the intricacies of his background, or can't seem to wrap your mind around some of the details of the policies he is proposing - I'd like to ask you to take a minute to do what I do when I see a discouraging news poll or hear a political pundit tell America why we shouldn't be supporting this man - try to visualize something positive about Obama that YOU care about. 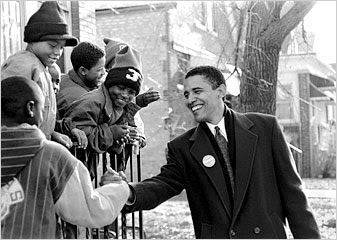 If you've been coming here this week to check out the "What Do We Want?" series, I want to thank you for reading. And if you think the Kool-Aid I've been serving here is too sweet, do what my mother used to do - water it down a little.