"Uncertain" - Word Of The Day 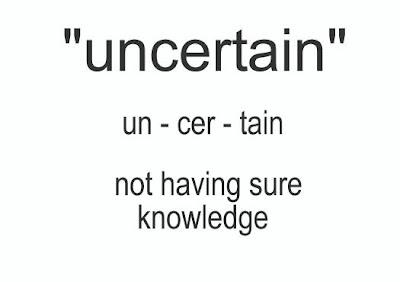 Uncertainty is one of those things that ranks right up there with breathing as a constant in modern life. There are so many things you don't know, so many things you can't predict. For me, it is the pointed use of words like this by the nation's punditocracy to describe the mood of mainstream America about the candidacy of Barack Obama that exposes the fallacy of the country's moral supremacy.

This is the same word, uncertainty - this not having sure knowledge - that predicates the conditions upon which wars are waged, especially when little or no effort is made to analyze the facts of a dispute in a search for the truth.

Foreign terrorists do not pose a fraction of the risks to our society that our own home grown ones do. And yet we will demonize entire nations of people we are uncertain about, even as we allow our own citizen terrorists to wreak havoc on an American native son.

These are the enemies America should be routing out with a vengeance; these are the people we should be unfurling wrath of biblical proportions against; that we should have an unrelenting fervor to forever eradicate from the face of the earth.

Turbans do not strike fear in my heart - I am most afraid of those among us whose minds are turbanned, whose fanatical, traitorous hearts dare to surge with rage against me - because if a man who calls himself my countryman is willing to plot to kill Barack Obama because of the color of his skin, then he is willing to kill me.

To willing accept this type of ignorance among us, to turn a blind eye to this scourge, is worse than if you join hands with these homegrown terrorists, more abominable than if you financed the purchase of their assualt rifles, more repulsive than if you helped them lay out their plan of attack. It is this studied silence in the presence of these stateside fanatics that erodes the trust between races here in America, a silence so loud that I can feel it throbbing in my eardrums as I even as I write these words.