The Punditocracy - Keeping You Uninformed 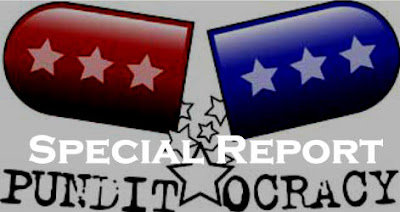 One of the things I've noticed, after spending the last two evenings watching Michelle Obama and Hillary Clinton speak, is a wide disconnect between what I see and what some of the punditocracy write the next day. Granted, many of them are there in the flesh, but with the magic of the internet streaming and the army of bloggers in attendance, I am able to see a lot more than the heavily edited product the news networks put on the screen. And what I see, in many cases, doesn't jibe with what they are telling me.

The thing that seems to get weighted too heavily in these speeches is their appeal to the press. Mrs. Obama hit all her notes on cue, like she does everyday as a successful Harvard trained lawyer. Many of the elements of her speech catered directly to the pundits who would be dissecting the text of her speech the moment she left the stage. Mrs. Clinton, a wily veteran of the political oratory, showed she knew her way around a microphone, with an array of quotable sound bites built right into her delivery, giving extra emphasis to the key phrases to make sure the punditocracy picked on them immediately.

To me, the "no way, no how, no McCain" soundbite ready phrase Clinton started off with was as explicit as she could get without personally threatening the small but vocal subset of her followers who are threatening to changing ideological horses in midstream. It was the kind of statement a person says when they are not interested in having a debate; when they are not interested in hearing your side of the story.

Hilary Rosen, a CNN correspondent who seemed to be very impressed with Clinton's speech, believed Hilary was "calling out" the bitterest of her supporters who were still not interested in getting behind Obama. "Basically," Rosen said, "Hillary was telling these women, 'I am not your therapist. So get over it, because I'm ready to move on, and we've got work to do.'" Rosen was one of the few pundits who was unequivocally positive about Clinton's address.

This tendency of the punditocracy to be supercritical of the politicians they examine is best explained by an anonymous pundit. "You can be wrong as long as you're skeptical. But if you're going to say something remotely positive, you'd better be 150% right, or you're going to be accused of rolling over."

So if you are listening to the commentators on CNN or Fox or MSNBC this morning, take what they are saying with a grain of salt - the things they are focusing on, those things that were not said, those signals that were not given, that body language that didn't telegraph the right message, are a lot like the things FAA inspectors look at when they inspect a plane crash. But Clinton didn't crash last night.

She glided her campaign in for a three point landing, the way veteran pilots do.