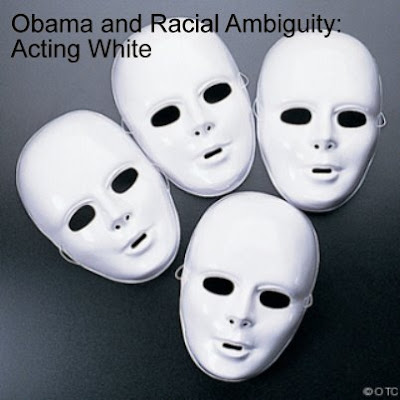 Barack Obama has been accused by various black leaders and pundits, including Jessie Jackson, of "acting white’. But if Obama has been raised by a white grandmother and white grandparents, is he acting, or are his actions authentic?

The perception that Obama has been "acting white" is directly linked the assertion that he is ignoring issues germane to the black community to better cater to the ideals it is presumed that white voters must have in their presidential candidate.

To take this premise a step further, then – if Obama is accepted by mainstream America because he doesn’t exhibit any of the traits of the stereotypical African American – those of us who do not use standard English, who do not have conservatively styled hair, who are not highly educated are in effect rendered invisible to white Americans, much like Ralph Ellison’s main character in Invisible Man.

Though a staunch few of us continue to lambaste Obama relentlessly for this betrayal, this inability to be true to himself (although we often flip flop on this – one day he’s black enough, the next he’s all white), to be true to his people, most of us have rejoiced in unison as he continued throughout the primary season to attract a significant number of white voters. The undeniable fact about being considered “African American” in this country is the visual difference – it is usually so distinctive, even for guys like Obama, that there is no possibility that he could be mistaken for anything else but an outsider like the rest of us.

Are these few, these holdouts content with being outsiders forever? If the things we say we want the most from America – racial equality and equal access to economic opportunity – were here today, would we be ready? Would enough of us be equipped enough, skilled enough, able enough to take advantage of the situation?

If you take a hard look at the concept of identity, especially as it relates to Americans, you will find that the roles we all play are not as static as they appear. Five hundred years ago there was nothing that existed on this continent that defined a human being in the way we define ourselves now. The who, what, why and how that each of our ethnicities possessed we when got here have been altered dramatically over the centuries. The boundaries that we have chosen to live by, or have been forced to live by, are largely constructs of the mind of man.

Undoubtedly, Obama bumped up against some of these constructs as he began maturing from boy to man.

One of the more curious features of American life has been the ability of our citizenry to merge common customs of certain ethnicities - in particular, the characteristics of the Irish, the Italians, the Croations, the French, the English, the Germans, the Dutch, the Swedish, the Russians, the Polish, the Czechs, the Hungarians, the Austrians, the Danish, the Finish, the Romanians, the Norwegians, the Ukrainians - into an über whiteness, a self image purer than the reality of those who wear its mantle.

Whiteness is as much a property, a state of being, as much as it is a trait - within the Big Tent of racial and cultural amalgamation we know as "White America", it is a badge of membership, of belonging, that supersedes individual differences.

Blackness is no less a state of being.

Today's whiteness, like today's blackness, is the last in a long line of new and improved versions - more refined, more efficient, sleeker - but not totally new. The advent of the Obama phenomenon has put on the table of public opinion an important question that many of us African Americans seem to have trouble answering for ourselves.

Is the authenticity of what we perceive to be "blackness", or "acting black" diluted or watered down if we cross these artificial boundaries?