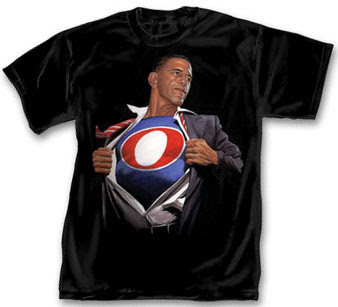 This entire week at the Democratic National Convention - the pomp and circumstance, the parties, the rousing speeches - has all been staged for one purpose: to introduce Barack Obama to the citizens of this country as the party's candidate for the presidency of the United States of America. The drama has unfolded night after night, bringing the convention to its culminating moment tonight when Obama will accept his party's nomination. Obama, who has been a daily presence on television for months, has been out of sight these last few days, appearing only briefly last night to congratulate Joe Biden on his acceptance speech.

"This is the moment", a common refrain that is a hallmark of Obama's campaign speeches, a phrase that his faithful followers have heard so many times during the primary season, will resonate in the hearts and minds of the 75,000 people who will pack the Invesco Field this evening in Denver. Tonight, Barack Obama is expected to emerge with his metaphorical cape on, transformed from presidential hopeful to the Democratic Party's standard bearer.

I think he's had it on all along - a cape knit from the work and the energy of the hundreds of thousands of people who scour the malls and the intersections and the community centers across the country every week, searching out and registering new voters even as the delegates and super delegates celebrate this week in Denver. From having the ability to attract and develop the kind of brain trust he has had running his campaign, to having the stamina required to keep up a herculean appearance schedule, to demonstrating the intestinal fortitude necessary to weather the immense challenges posed by his opponents, the "O-Man" has shown us how to tap into our own super powers to help him to get to the White House.