The Kids Can Stay Up Tonight 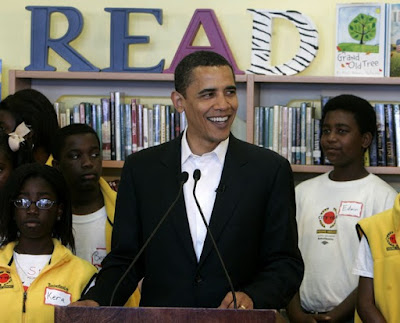 My mother was a school teacher for thirty eight years. Back when I was young, I watched her grade papers at the kitchen table. Call parents at home after dinner. Fill out lesson plans for the week ahead. Inevitably, there were stories about her students.

"I've got kids in my class - fourth grade, mind you - these kids are telling the jokes on Jay Leno. Can you believe that? What is a fourth grader doing up that late?"

In a small Southern town, where a significant amount of the school aged children attended private schools, the majority of her students were African American. There was nothing that would exasperate my mother more than having a child in her classroom who was hungry to learn who didn't have the support of at least one parent at home to help them master the basics that would be the foundation of their education.

"I don't see how the child can learn - whenever I call the house it sounds like a party is going on over there."

The fourth grade was just about the point where kids started making up their mind about how they wanted the world to see them. It was the point where the sneakers tapping the floor beneath the desks got more expensive, where the jeans hugging prepubescent legs and hips began to sport designer labels.

"This boy sitting up in my classroom has a neck full of gold chains, and he's eating free lunch? What kind of sense does that make?"

My mother was from the old school. She wore suits and carried a briefcase to work everyday, because she meant business when she got in the classroom. She watched children who were still wet behind the ears rush to imitate the antics of the teenagers and young adults and people they saw on TV - staying up late, hanging out on the corner, talking trash like a sailor - activities which sacrificed a lot of the time they could have used to reinforce the lessons they'd learned that day, instead of trying to grow up too fast.

One of the unintended consequences of Barack Obama's campaign has been the gargantuan amount of attention the press and the networks have given to telling and retelling his story. Even in a world that lives in the limitless connectivity of the internet age, our central daily narratives are still driven by big media. But big media doesn't have an unlimited amount of bandwidth - they have to be selective about what they choose to emphasize in their coverage.

Guess what? The preponderance of news about Obama's historic campaign has crowded out many of the lesser stories about African Americans that used to fill the airwaves. If Obama is the lead story, it seems to leave less room for the 9,999th story on the crack dens in the ghetto.

If there ever was a night for kids to emulate what they see on television, this is it. Tonight's talk show host will be Barack Obama. He won't be as funny as Leno, or as self-deprecating as Letterman. He won't be as fiery as King was forty five years ago.

But he will be inspirational, that you can count on. So whether your child wears Air Force Ones or Chuck Taylors, flip flops or Birkenstocks, whether they normally gather around the kitchen table, the stoop out front, or the video game console, gather them around the TV tonight to watch Barack Obama's acceptance speech.


Then click your remote until you find a channel that shows convention coverage, and put it away.