Does "No Negro Left Behind" Trump "Yes We Can"? 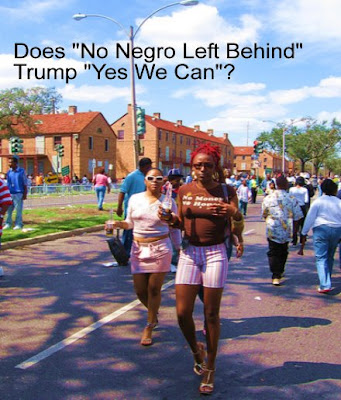 While I’ve been waiting for the water hoses and the dogs from the usual suspects, I’ve been hearing a constant refrain – at work, on TV, on the internet – lately from my fellow black brethren about Barack Obama.

He doesn’t need to "lecture black people" about personal responsibility.

He should be mindful of the tone he uses when he speaks to us.

He sacrifices black people to score points with whites and other non-blacks.

I was offended by his criticism of black people.

What gives him the right to call anybody out about anything?

Since he doesn't have anything good to say about black people he shouldn't say anything at all.

The boundaries of blackness are hard and fast for a certain segment of the African American community – they cannot possibly be authentically black, they opine, if they don’t remember to eat a plate of neck bones from time to time, or relish the thought of a fresh pot of collard greens simmering in fatback. I myself am routinely admonished by these self proclaimed "authentic" blacks when I confess that I do not like cornbread.

There is a stubborn subset of the black community that wants to have their cornbread and eat it too. But if they are honest with themselves, they have to admit that all white skinned people do not enjoy all the attendant privileges of whiteness. Southern rednecks, Appalachian hillbillies, Midwestern hicks- they face a level of ostracism that is almost equal to what some of us encounter because we have our hair braided, or because we wear hip hop clothing, or sport rows of gold capped teeth.

We have our own version of "No Child Left Behind" – it’s called "No Negro Left Behind". Among this stubborn subset who insists upon following this doctrine, there are those who are willing to forego mainstream American success in favor of honoring their inalienable right to express themselves through their dress, manner of speech and modes of behavior. Closely related to this group is a less confrontational faction, reluctant participants in conventional America who are committed to the idea of pulling up Uncle Petey and cousin RayRay and sister Ne’Ne’ along with them, but are loathe to advocate any act of transformation – Uncle Petey, RayRay and Ne'Ne' are to be preserved in toto, as if the slightest alteration to their demeanor, dress or decorum would invalidate their African American membership cards.

So why do these steadfast people balk at having to change, if the things they are doing now are not working? Self esteem comes from achievement, not someone patting you on the back. Achieving anything worthwhile in this country means you have to connect to the rest of the people in it, whatever they look like. In case we have forgotten our history, white people have had to "act" too to grow beyond their own Italian or Irish or Greek or Spaniard or Eastern European roots - more of them have gone from cabbage to caviar than some of us might be willing to admit.

Do we as black people, especially those of us in this stubborn subset, have enough intestinal fortitude to face our own pathologies and see them for what they are without worrying about who is watching while we do it?

Is criticism that takes any of us to task for our weaknesses only to be administered by bona fide, certified 100% black leaders?

Barack Obama has been lambasted by by black preachers, black community leaders, and a lot of the same black men who believe that Oprah Winfrey is their mortal enemy. My own co-worker, a well educated black man from Alabama, was so incensed at Obama's Father's Day speech, even though he didn't hear or read it in its entirety, that he vowed not only to revoke his support of Obama - he swore he would get some "Vote for McCain" signs and parade them through black neighborhoods "his damn self".

Obama could have done a Michael Jordan, and remained silent on EVERY issue that affected black people. Just smile at us once in awhile, you know, and given us that sly little wink like Mike does while we continue to buy his shoes. He could have just keep talking about abstract policies, the same way all the other presidential candidates before have, and left Uncle Petey and cousin RayRay and sister Ne' Ne' alone.

If Obama can see the mountaintop, and we can't, I would hope that we could trust him enough to believe that what he’s telling us works. That what we take to be ingrained in our DNA is largely an illusion - if we had been indigenous to Siberian climes, for instance, we would be some brownskinned borscht eaters.

One of the things we don’t really focus on in our own history is the fact that the black people who had firehoses aimed at them and police dogs sicced on them for demonstrating against segregation were some of the very same black people who sat at the table with the white foes of integration, once both sides agreed they needed to talk.

Are those of you in this stubborn subset ready to sit at the table?
Posted by Brown Man at Wednesday, August 13, 2008