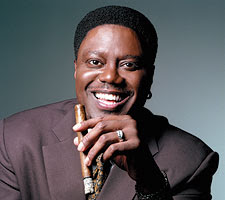 "I'm an ordinary guy with an extraordinary job."
Bernie Mac


S. and I went to see “The Kings of Comedy” years ago, not long after we’d moved to Atlanta’s northern suburbs. I was familiar with Steve Harvey, Cedric The Entertainer, and D.L. Hughley, but I didn’t know much about Bernie Mac. Bernie was the last man on stage.

He came trotting out, black as midnight in a medium blue suit, stopped in the center of the stage and looked at us as if he wanted to fight.

“I ain’t scared a you motherfuckers!!” he yelled into the microphone.

Believe it or not, he hit just the right note of intimacy with that phrase - both his on screen audience and those of us in the theater cracked up, because we knew that he was talking to us. This was NOT a Seinfeld crowd.

When he got this part of his act:

we laughed so hard I thought they were going to put us out of the theater. I was tired by the time the credits rolled.

Saturday night, the Obama Campaign held a fundraiser at the Hyatt Regency Hotel. About 600 people, some of them celebrities, attended the $2300 per person event. Obama was introduced by Bernie Mac, who began by talking about the movie he did with Chris Rock about a black president, Head of State.

"Barack, you need to look at it so you know what they're going to do to you," Mac said. "I don't know why my man Barack wants to be president but I'm proud of him because politics is dirty especially with Republicans. So Barack, you can't get mad, you understand, when you hear rumors because people like rumors. They're going to say things like, you were at the club with Lil' Kim and you and Kanye West got into a fist fight."

Mac then jokingly offered himself up as a running mate. "They don't want me because I cuss."

"Being a president is tough cause you're not just running the county. You got to run your family too," he said. "Having a black first lady is different. You're still going have to do the dishes and the laundry and all that…you got to pick up the kids. You didn't pick up the kids? I just came from Korea, talking about nuclear weapons. You were on Air Force One and you couldn't stop to pick up the kids?"

Mac said he was a Democrat "born and raised" but added that "I'm a Republican at tax time." He mimicked a mock warning from an imagined staffer: "Don't kill the message."

He then talked about his wife, who he's been married to for 35 years, and how she just went through menopause.

He promised to help Obama and that he would be there "like the Jackson Five" and ended his irreverent riff with a joke.

"My little nephew came to me and he said, 'Uncle , what's the difference between a hypothetical question and a realistic question?' I said, I don't know, but I said, 'Go upstairs and ask you mother if she'd make love to the mailman for 50,000."

The mother says she would make love to the mailman and anybody else for $50,000.

The joke received an angry response from at least one person in the audience who said it was offensive to women. “It’s not funny. Let’s get Barack on,” shouted a man from the crowd.

Obama came on, thanking, among others, "my great friend, one of the kings of comedy, Bernie Mac."
He then gave an abbreviated stump speech with a quick run-down of his platform, briefly touching most policy areas and using his usual language and jokes before poking fun at Mac toward the end of his 20 minute speech.

"Everybody is concerned about whether the Democratic Party will be unified in time," he said. "We don't have an option but to make sure that we are united and make sure that we succeed…we can't afford to be divided by race. We can't afford to be divided by religion, or by region or class. Or by gender," he said, pausing for effect. "That means, by the way, Bernie you got to clean up your act. This is a family affair… I'm just messing with you," he said.

The campaign issued a statement shortly after the event that was decidedly more serious in its condemnation of Mac's comments."Senator Obama told Bernie Mac that he doesn't condone these statements and believes what was said was inappropriate," campaign spokeswoman Jen Psaki said.

Politically correct he is not, but The Mac Man doesn’t give a damn – or at least he didn’t, until The Bernie Mac Show. Mac had complained for years that he was the only one of the “Kings” who had not gotten a shot at a TV show. He had to reign it in a LOT for TV, but even then, everyone in the audience could feel that profane undercurrent you knew was right under surface.

In an interview with Rico Washington for Rolling Stone, Mac admitted he had to change the depiction of his nephew as a flamboyant gay character in The Kings of Comedy stand up routine to settle a family dispute.

"I didn't really know I hurt my nephew. . . . I came home to see my family, and he wouldn't speak to me," Mac said. "I'm a comedian, I'm writing jokes. I'm writing stories and it was funny. But I was killing him. Especially when I said 'faggot.'"

To make up for his act, Mac showed up at his nephew's school unannounced and heaped praise on the nephew as "the closest thing to my life," the paper reported. Then, when Mac's new television show was in production, he decided to take a different approach. "I couldn't do him like that again," he said, and he changed the character so that his nephew was more like Mac himself as a little boy.

Bernie Mac has promised his audience for years that he will always “keep it real”. So what genius in the Obama campaign invited THIS negro to do stand up in front of a mixed crowd,
a crowd which I am sure was full of people who had just gotten to the point where they could mentally separate the “black candidate for president” from the “black suspect” when they
watch the evening news?

At the end of the Kings of Comedy movie, Spike Lee inserted additional footage that showed the comedians messing around with a basketball as they spoke directly into the camera. Bernie's segment neatly captured his philosophy:

"I'm tired a y'all fucking with us. I can't drive, I can't go no motherfucking where. I go to New York City and I can't get a motherfucking cab. What type of shit is this?

I vote, and I STILL get hassled.

I been with my wife twenty-five years. I ain't got no outside kids.

I ain't got no television show.

'Cause you scared a me. Scared I'ma say something.

Let me tell you something. Y'all been fucking with me for a long time.

Shit, me and Jim Brown ought to tear this motherfucker up!"