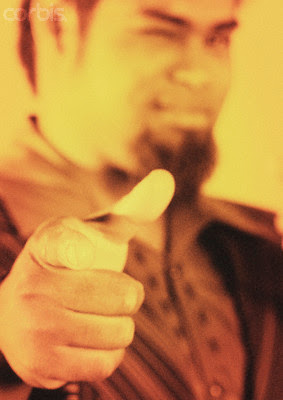 Is there a secret black frequency I must tune into when I see other black people in mixed settings? Like Barack Obama, I seem to be getting this African American thing wrong lately, as if a few pages of our "Keeping It Real" handbooks are stuck together.

S. and I sat in a restaurant a week or so ago with some friends of ours, ex-neighbors we’ve known for over ten years. We were in the middle of catching up on who was doing what in our old subdivision when a black woman approached our table.

The friends of ours were white, two northern transplants from Pennsylvania and New Jersey whose sensibilities had clicked with our small town Southern and Midwestern selves long ago. The female interloper was black, like S. and I.

"Don’t I know you from somewhere?" the woman said, looking directly at S.

S. turned and looked more closely at the woman. "I think it was at a party – it might have been a party at our house. Yeah, that’s it, don’t you remember her?" S. said to me.

I raised my eyebrows towards our friends, who had been in the middle of an animated discussion about a wedding they were going to attend the next day, and then peered at the woman.

The woman stood there anyway, as if there was some kind of magnetic force emanating from the end of our table, continuing a line of patter across my back with S. about the mutual friend they shared.

S. went on for a few seconds, while I smiled at our friends, who were waiting patiently to get back to their story. S.’s tone began to change, becoming more distant with each word as she attempted to signal to the woman with the pitch of her voice and her clipped responses that this exchange needed to come to a close.

The woman kept talking, probing with each word for a sign of solidarity, a sign that we still remembered where we came from. There was something extra in her gaze that seemed to penetrate a little more deeply when she looked at us than we she glanced at our friends. It was the same something implied in the way she paused after certain words she said, as if we were Navajo code talkers, speaking an indecipherable language at a frequency level only black people could hear.

Our friends kept smiling, their eyes darting in the woman’s direction every few seconds, until S. was forced to introduce the woman to our friends.

We practically had to shoo the woman away from the table.

For a few minutes after the woman left, there seemed to be a distance between us and our friends that had hadn’t been there when we had arrived at the restaurant. It slowly dissipated, disappearing all together by the time our food arrived.

I understand all too clearly that there are things my brown middle class brethren who have self segregated themselves will have to overcome in order to have these kind of friendships. "This is our moment", the Obama mantra that sends audiences into a frenzy whenever he utters these four words, speaks to more than the idea of electing America's first black president. To me, "this is our moment" also means that it is time for us as black Americans to reach out across our own personal boundaries and connect more fully with the larger world around us, like the Irish did, like the Italians did, like the Jews did, like the Asians are doing now.

This is one of the things about the Barack Obama phenomenon that the mainstream media culture hasn't picked up on yet. It still seems to be obsessed with the kind of tribal imagery more reminiscent of an old Tarzan movie - African drums speaking to each other across the plains in the middle of the night as the great white hunters sit fearfully by their campfire - than it is of reality. A ridiculous number of hours were devoted to deconstructing the "fist bump" that Barack gave his wife Michelle before his speech in Minnesota to claim the Democratic nomination, as if it were a signal for the rest of us black folks to start executing our secret plan to take over America.

S. and I know where we came from. We know who we are. Hanging out with black people exclusively isn't going to make us any blacker. Hanging out with white people all the time isn't going to make us any whiter. But even though I feel this way, I can understand the black woman's reluctance to acknowledge that our white friends could be just as important to us as she was. For me to get to the mindset I have today was a constant struggle against ingrained prejudices and a fear of the unknown. To this woman, and to others like her, all I will say is this - the TV commercial promoting Southwest Airlines is absolutely right – "you are now free to move about the country".