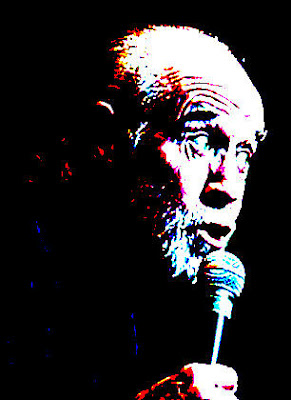 "These days many politicians are demanding change. Just like homeless people."

Even die-hard Obamaholics have to appreciate the irony in that joke. George Carlin's biography has been plastered all over the airwaves and the newspapers the last few days. Most of it is concerned with a chronological ordering of his accomplishments - you can check out any of the major news networks if you want a blow by blow of his life story. From where I sit, his relentless questioning of the status quo - "taking it to 'The Man'" - gave him his counterculture persona, but it was the inventive way in which he examined our everyday lives that made him famous.

I saw him in the eighties, when he came to my college to do one of those shows the student union put with the student dues they collected. I'd never heard of him. One of my pals from Detroit was incredulous. "You've never seen Carlin? Man, you would REALLY like him! He's more intellectual than the average comedian, dude. I CAN'T BELIEVE you've never heard Carlin!"

We went to the show, and Carlin was as advertised - his riff on "the importance of stuff" is still funny. He was only just turning fifty one but he already looked old, with the graying ponytail, the gonzo beard, and his trademark black outfit.

"This country was founded by a group of slave owners who wanted to be. Am I right? A group of slave owners who wanted to be free! So they killed a lot of white English people in order to continue owning their black African people, so they could wipe out the rest of the red Indian people, in order to move west and steal the rest of the land from the brown Mexican people, giving them a place to take off and drop their nuclear weapons on the yellow Japanese people. You know what the motto for this country ought to be? 'You give us a color, we'll wipe it out.'"

Carlin was as much a political animal as he was a comedian. A self-avowed atheist, in later years his comedy seemed to be one long rant against religion and government.

As sour as Carlin's joke sounds, though, in real life, in a March interview at Huffington Post, Carlin professed "Yes, I think the Obama story is an inspirational story, it's a wonderfully unique American story and it's exciting and fun to watch but even if he's elected and makes a lot of changes I still retain the right not to belong. I just like it out here."

Even though Carlin loved being anti-everything, I figured a guy like him would be on the O-Train.