This Is Not A Horse Race 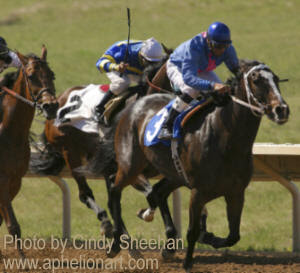 One of the fallacies that has been propped up by our main stream media journalists for the last month and a half is that this primary is still a horse race. What almost all of them conveniently ignore is the tremendous amount of energy, time, money, and an improbable shift in the actual demographics of the remaining states that would be needed for the Clinton campaign to garner more than the 50% total of the outstanding pledged delegates she is projected to get based on current state by state estimates.

Which is why if you are unfamiliar, as most Americans are, with the way delegates are actually accumulated through the proportional vote totals of individual congressional districts, we are more likely to think of the way a sporting event is scored – that Clinton COULD upset Obama if she could “run the table” in the remaining contests.

But “running the table” – Obama having no net gain in delegates – is impossible. He would have to get less than twenty percent of the vote in each of the remaining states for Clinton to get within spitting distance. Most of the larger congressional districts out there have 4 to 6 delegates at stake. 62.5% of the vote in that district is needed to go from 2-2 or 3-3 to 3-1 or 4-2. In order to blank an opponent, the opponent has to have a vote total that is below the threshold needed to gain at least one delegate, which is usually 15%.

The thing that is maddening to me is that every journalist in the country who is on the political beat or is a political columnist sees this kind of information about each states primary delegate allocation methodology all day every day. Yet their headlines suggest that Obama is hearing Clinton’s footsteps as she gains on him.

These are the numbers as of yesterday, which is already off when you include the guy below for Obama:

Clinton is 430 delegates short of the 2025 needed to nominate and has to capture 62 percent of the 408 pledged delegates yet to be selected and the 286 superdelegates yet to commit in order to get there.

Obama needs just 295 delegates of any stripe to close it out.

There are only 86 pledged delegates left to fight over between May 20th and June 3rd. From where we stand right now, Obama looks to pick up 35 – 38 of them.

In this scenario, Clinton gets the balance of the 408 delegates outstanding – 223.

If my math serves me correctly, from where she is right now, this would put Clinton 207 delegates away – only a hundred delegates but twice as far from the prize.

Something tells me there are more than 110 superdelegates who are wearing an “O-Man” t-shirt under their dress shirts. There are a lot more people who will be ready to get to the end of this thing, like the guy below, in the next two weeks.