Keeping The Tally From Our Eyes 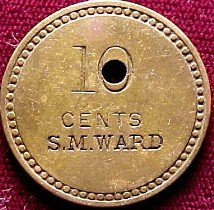 "As you sow, so shall ye reap"

All these machinations that we will be privy to before the Democratic Rules and Bylaws Committee meets this weekend to decide how to handle the mess the Michigan and Florida state delegations have become will probably give us some new numbers to live by.

The end result of all the posturing and protesting that will take place Saturday at the Marriott Wardman Park Hotel in Washington, DC will most likely be the emergence of a new goalpost – maybe 2208 delegates this time – that Obama or Clinton will have to acquire in order to claim the nomination.


I have heard this story before.

Growing up, my father used to tell us colorful stories about his uncles and aunts and cousins who grew up around him in the country. One of the stories that has stuck in my mind for years was the one about an old plantation, located a few miles from my grandfather's house in the Lowcountry of South Carolina, that became a sharecropping operation after their slaves were freed.

His cousins had lived on this plantation's grounds for generations. They were still there at the middle of the twentieth century, even as the civil rights movement was fomenting around them. They worked the landowner's land by day and lived in the landowner's shacks by night.

Stores for groceries and clothes were far and few between – moreover, you needed to have cash money to purchase any goods. But sharecroppers didn’t need to go to local stores – the landowner had a store he operated especially for his help. This commissary was a place were the sharecropper could buy clothes and food on credit until harvest time, when his share of the crop went to market.

The theory behind sharecropping suggested that the tenant farmer had an opportunity to earn enough money to pay off what he owed to the commissary and put the rest aside. In practice, this never happened – no matter how much money your efforts yielded, the amount you owed was always higher than what you earned. The ledger was not open for inspection – it was this part of the story, more than any other, that made my blood curdle every time I heard it. This power the landowners had, an authority so vast it allowed them to alter the details of previously agreed upon terms, a control so absolute it permitted these landowners to change the amount of money these hardworking men and women owed to them with nothing more than the stroke of a pen - this kind of power scared the hell out of me as a child.

My father would pause here, letting his description of the commissary arrangement sink in for a few seconds, answering questions from me and my brothers - why didn’t your cousins have any MONEY? - as well as my mother - you mean to tell me your cousins were still on the old plantation IN THE FIFTIES?.

Then he would plunge into the Brier Rabbit part of the story, relating to us how his cousins, having had enough, vowed to leave at the end of the next harvest. And the only way to leave was to pay off their debt. So the head of the family went to the commissary that fall and received his allotment from the harvest. It was weighed, a figure was arrived at, and he carried his scrip to the commissary, where he applied it to his bill. But this time, instead of taking a verbal accounting of how much more he owed, he asked the landowner to write it down.

The landowner handed him a slip with a figure on it. That’s all he walked out with – no flour, no sugar, no coffee, no salt pork, no rice, no toiletries – nothing but that slip of paper.

My father’s cousins went to work in earnest then, making what they had last as long as possible, borrowing what they could not do without from relatives like my grandfather, going back to basics as they hunted, fished, and gathered practically everything they ate for the next twelve months after toiling in the fields all day.

So the next fall, when it came time for harvest, when it came time to settle up with the landowner, my father’s cousins had enough amassed enough scrip to settle their tab. It is this part of the story that I have probably romanticized above and beyond the imagery my father provided, adding extra heft to the pasteboard suitcases they had packed to the gills, extra shine to the moonlight as they trudged away from their empty shack under the cover of darkness, an extra gleam in their eyes as they headed for the main road, their next stop the train station, their destination, New York City.

It is stories like this, stories told and retold, most of them containing more than a kernel of truth at their center, that make me and people like me wary whenever we see business that is meant to be public conducted in private, whenever we see men with knowing smiles emerge from smoke filled rooms…whenever we sense that someone is keeping the tally in the metaphorical ledger book from our eyes.

The Democratic Party Rules & Bylaws committee has a hard job to do. I don’t envy them. The piles of delegates Barack Obama and Hillary Clinton are standing on aren’t much different than the plantation token pictured above this commentary. Whether or not these delegates will retain their original value or be assigned a new unit of measurement is entirely up to the landowners, oops, I meant committee members, who will convene this Saturday, just before the candidates begin to harvest the fruits of their campaign labor.